Welcome to 2020s Prophecy!
(click pics for linked details)
I'm your host Bill Weather, prophetically gifted watchman, anointed with many signs, dreams and visions and a prophecy book like no other.
Fresh Prophetic Updates Here
I've compiled end time prophecy here, to watch for huge events to come, backed by signs, dreams and visions with multiple confirmations from I and others. Prophecy without timing is not very useful, but there are strong evidences  to the timing of these events below, detailed in their links.
Here also, the 2020 crash foretold from 2 years ago (from 2018),  a 2020 exact day prophecy that's been fulfilled!

Because 2028 is 2000 years from Christ's 1st coming (1-3 yr margin of error), this would be the timing of his next coming. There are 20 very strong prophecy evidences for this view, in my new book... Evidence Backed End Time Prophecy, the 1st 10 pages free, thru Amazon Kindle and here at prophecybook.net
Top 10 Prophecy Questions
based on supernaturally backed info given, not just bible conjuring
1. What is the mark of the beast?  <<< best answer
Simple answer - Supernatural prophecy revealed, the mark of the beast will be formed from a global reset, once the US is taken out. It will happen in a treaty in Paris, the great reset, where Russia and China will be the new boss. They will invade Europe once the US is taken out. Russia will be give control over all of Europe and China will be given control over other parts of the world. They are the 2 horns of the beast in Revelation 13, who form the image of the beast, the global reset, so any kind of false prophet or falsely labelled "Antichrist", would come out of that global reset. This is supernaturally revealed prophecy through Dumitru Duduman, Jonah Ben Noah with Henry Gruver, Bill Weather, John W Johnston and others confirming, with dreams, visions, signs and wonders and miracle answered prayer proving it.  It looks to be a very short time of the rule of this Beast before Jesus comes, 3.5 years long. Claiming a mark without even identifying the 2 horns of the beast or the image of the beast, is putting the cart before the horse. HEE HAW!
2. Where is the US in Prophecy? <<< best answer
simple answer - Revelation 18, not Revelation 17.
That's an entirely different (religious) entity. The United States is the only entity that even comes close to all the ear mark descriptions of Revelation 18. Notice, the kings of the earth are getting rich through her (Rev 18:3). That would be through mainly Wall Street. The kings of the earth are not getting rich through the Great Whore of Revelation 17. That entity is a religious entity, many prophecy teachers pointing to the Papacy, as it's fulfillment. Thus proves, the Whore of Revelation 17 and the Babylon of Revelation 18 are two separate entities. Most prophecy teachers have not discerned this from scripture, so they are muddying the water of clarity. In Dumitru Duduman's wide awake supernatural encounter with the angel,  he was told Revelation 18 is where to find the US in prophecy.  This information was backed the next day by 5 separately described manifestations by the angel, that came to pass the next day, exactly as the angel foretold.
3. When is the Rapture?   <<< better answer
simple answer - 2027-2031 with high time to watch at the feast of trumpets in 2028.
Given a 1 to 3 year margin of error, pivoting off of the 6000th year (2028), we are watching for the feast of trumpets in 2028. Pre trib rappers would hinge on 3.5 years before that, spring of 2025, but all biblical language tells us at "the last trump", at "the last day", "after the tribulation."
I Bill Weather, personally believe post tribulation rapture in 2028, 3.5 years long, with the judgment and wrath of God possibly during the 2028-2032 time frame.  2032 is the 2000 year mark from the resurrection, so that may be the time he comes to reign as King of Kings. There are a number of scenarios that could be conjured from scripture reference, which I'm not goin got argue because the way more important thing to be focused on, is enduring to the end, in the hard times to come.
4. Will we be going through the tribulation? <<< better answer
simple answer -  yes, we will face some tribulation, most likely, a 3.5 year tribulation from the fall of 2024 or spring of 2025 to Fall of 2028. The evidence to this is in the dream by Alfred Karunakarun, with the years 2025, 2026 and 2027 missing from the dream, while 2021 to 2024 are there as a count down, with 2028 as the year Jesus comes. There is also other signs, dreams and visions from others with some indicators agreeing, like the 2nd eclipse coming in spring of 2024, marking the big X over the United States. I was shown in a fascinating number sign (in my book) that 2024 is the last year for the US as we know her. There is also the kick off testimony of Dumitru Duduman in 1984, forward 40 years, is 2024. 40 is a biblically significant number all throughout scripture. The big fundamental evidence is in the 6000th year, being 2028, backed by bible chronology and numerous quotes from early church leaders of the end coming at the 6000th year. Counting back 3.5 years, as shown in Revelation, would be the tribulation starting  2024/2025. Based on the 10 signs of the California mega earthquake coming for 2022, their tribulation would start sooner.
5. When is Jesus coming? <<< best answer
simple answer - He is coming in the 2027-2032 season. All signs, dreams & visions, bible chronology, early church leaders on the 6000th year, are all synchronizing and telling us he comes at that time. There is too much evidence given in the signs to not believe he is coming then. Give a 1 to 3 year margin of error as an out because of the nature of the prophetic unexpected, but the very strong evidence is there to believe for September/ feast of trumpets of 2028 as the high time to watch. The 20 evidences to the 6000th year in the back of my book is super strong. With all the other signs given, you can hang your hat on the solidity of the evidence.
6. What’s going to happen to the US? <<< best answer
simple answer - portions of the US are going to be bombed and invaded by Russia, China, Mexico, and others. What happens after is speculative, but portions of the United States are safer, like in the mountains and the middle parts of the country. California, Oregon, Washington, Nevada, Arizona, New York, the north east, the Ohio Valley, Minnesota, Florida, most urban areas and border areas will be much more vulnerable to invading troops and wicked people. Rural areas will be much safer.

7. Who or what is the Antichrist? See question 1.
Antichrist is called a spirit. There are also many antichrists, as John the Apostle tells us in his epistles. It's a term that should not be blended in to mean the man of sin or the false prophet spoken of in Revelation. In fact, those 3 entities may be entirely unrelated. There are many antichrists. The man of sin, as all the great reformers have told us, is fulfilled in the Papacy. The false prophet may be a 666 person coming out of the EU in The Great Reset. I'm not so concerned about a 666 man, as so many Christians have this as their focus. I'm concerned for the US when she goes down in WW3, which is way more impactful than a 666 man to come.

8. What is the abomination of desolation?
Simple answer - it was the roman armies who destroyed Jerusalem in 70 AD (Luke 21).
An idol in a temple cannot bring desolation, but an army can. Luke 21 parallels Matthew 24. When it says "no flesh should be saved, but for the elects sake, those days will be shortened" in Matt 24, Jesus was referring to the genocide the Romans proceeded to do against the Jews. Most biblical scholars measure this with just the 70 AD destruction of Jerusalem, without considering the full picture of the genocide that was taking place from 70 AD to 74 AD. There was not a worse time in Jerusalem from the beginning of time, no shall there ever be because when Jesus comes in the Battle of Armageddon, there will be an intact Israel and Jerusalem, whereas, the 70-74 AD Jerusalem was far worse with total annihilation taking place. Total annihilation will not be taking place because Jesus is coming to save Israel and Jerusalem and destroy the armies who try to invade her (Zachariah 14), proving my point, the futurists are misinterpreting the abomination of desolation scenario.

9. Will there be a 3rd temple? Who cares! When the US goes down, that's what will matter in prophecy. This question is based on rejecting every great saint of the reformation, who all said it's been fulfilled in the Papacy, in II Thessalonians 2. The Pope sits in a temple and is worshipped as a god. Presently not thought of as highly, but in the dark ages, he was idolized, thus, is its fulfillment. In fact Paul talked of a power withholding, till he would be revealed, then he would come and with him, a falling away. Today is not the day of the falling away. This is the great end time harvest and revivals are taking place globally. The falling away was the dark ages and from there, the popes were fulfilling the man of sin. Today we have huge amounts of people coming to Jesus from China, India, Africa and south east Asia. That's not no "falling away." That's huge end time harvest of souls for the kingdom of God. Thus, the entire futurist outlook is skewed because they are not yielding to what God has been revealing in prophecy, but are stuck on misunderstandings of an end time scenario they will never see come to pass.

10. What about Daniel's 70th week?
Daniel 9:24-27 (commentary in alt color)
24 Seventy weeks (70 x 7=490 years) are determined upon thy people and upon thy holy city, to finish the transgression, and to make an end of sins, and to make reconciliation for iniquity, and to bring in everlasting righteousness (by his blood), and to seal up the vision and prophecy, and to anoint the most Holy (All fulfilled by Christ).
25 Know therefore and understand, that from the going forth of the commandment to restore and to build Jerusalem unto the Messiah the Prince shall be seven weeks, and threescore and two weeks: the street shall be built again, and the wall, even in troublous times.
26 And after threescore and two weeks shall Messiah be cut off (cut off for our sins), but not for himself: and the people of the prince that shall come shall destroy the city and the sanctuary (Roman destruction of Jerusalem 70 AD); and the end thereof shall be with a flood, and unto the end of the war desolations are determined (proceeding Roman genocide of the Jews 70-74AD).
27 And he shall confirm the covenant with many for one week: (the covenant of his blood  1 week = 7 years, fulfilled 28AD to 35AD) and in the midst of the week (spring 32 AD upon his crucifixion) he shall cause the sacrifice and the oblation to cease; ( Old Covenant sacrifices no longer acceptable by God; replaced by the blood of Jesus)  for the overspreading of abominations he shall make it desolate, even until the consummation (70 AD destruction of Jerusalem), and that determined shall be poured upon the desolate.
Home
Subscribe to: Posts (Atom) 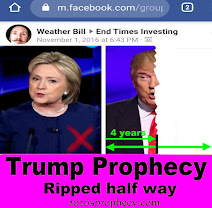 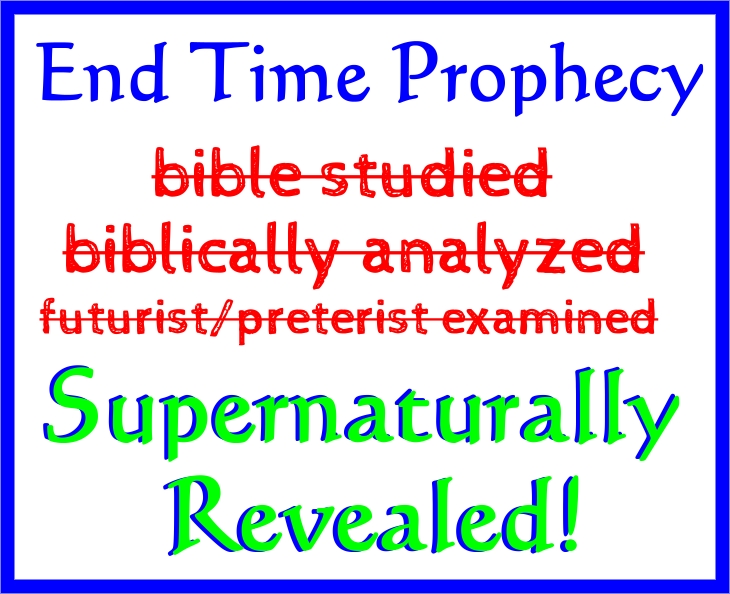 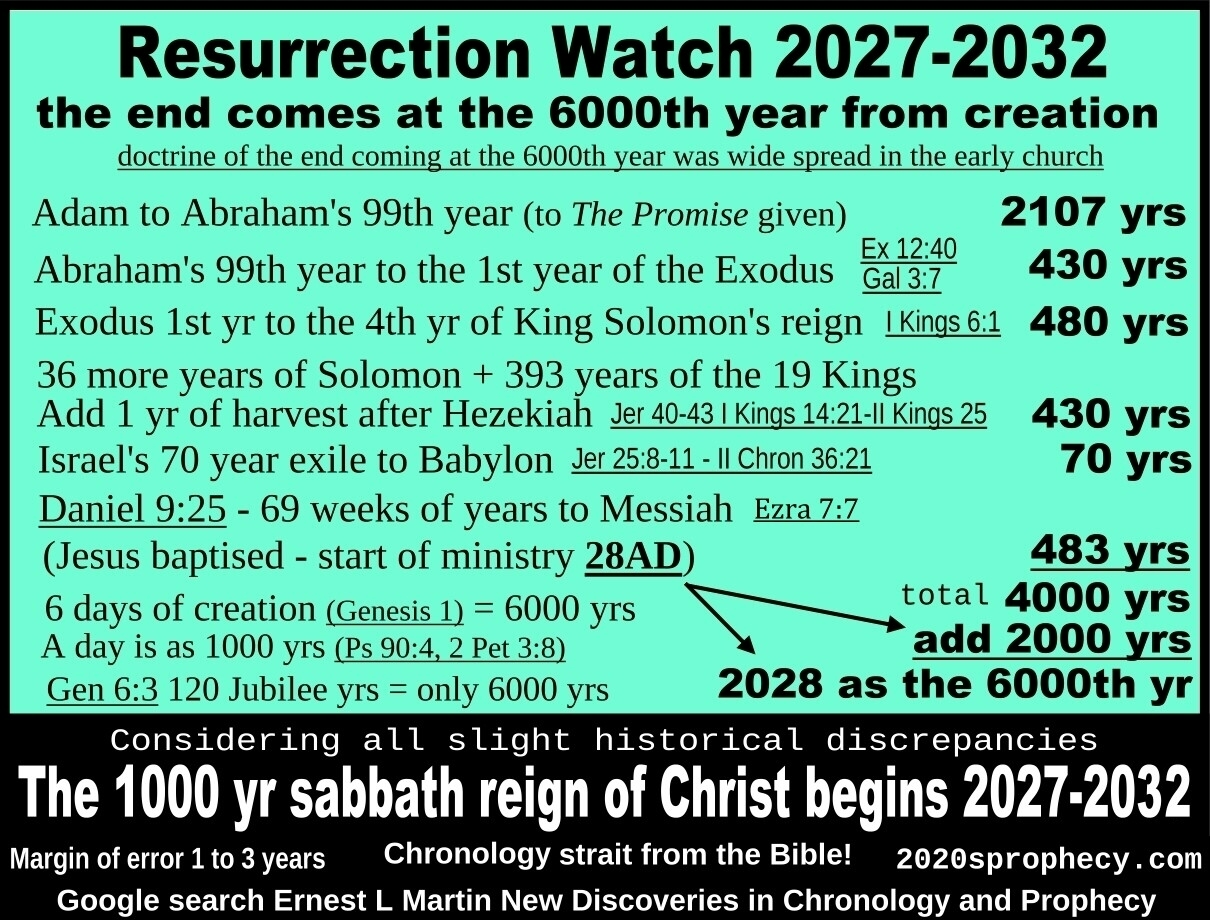